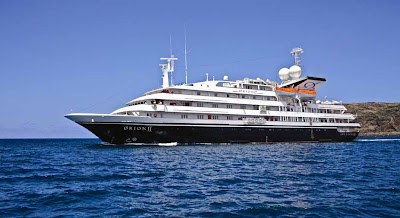 Outside the main towns many villagers have only been exposed to the western world through the workings of missionaries and occasional traders and so Orion’s visits are as great a source of interest to the locals as they are to Orion’s guests.
Until relatively recently this was still perceived as an isolated world of head-hunters, a land of mythology, sorcery and witchcraft. The last haunts of cannibals. Yet step ashore with Orion’s expedition team and you will be greeted with a broad smile and a warm welcome from gentle villagers – an eye opening introduction to a way of life far removed from our Western world.
This land of 800 languages with its remarkable cultural diversity will take your breath away. Whether it is the mysterious art of the Sepik or the feathered head dresses of a Tufi tribesman, the historic battle grounds of World War II, volcanic tropical fjords or pristine white sand beaches, Orion’s expeditions to Papua New Guinea will provide experiences that will stay with you for life.
During 2012 there are five scheduled 11-night voyages on Orion and one 11-night voyage on Orion II alternating between Cairns and Rabaul with visits to Sepik River & Watam Village, Madang, Tami Islands, Tufi, Kitava (The Trobriands), Samarai and Kwato Islands and Alotau (Milne Bay). Departures are on 9th and 20th March; 2nd, 13th and 24th October; and 15th November. Prices start from £5,395 per person including 11 nights onboard, all meals, entertainment and educational programmes, use of the ship’s sporting equipment and facilities, Zodiac excursions, port and handling charges, tender transfers and government fees and taxes.
For further information and reservations call 020 7399 7620 or visit www.orionexpeditions.com
Posted by Steve Newman at 00:22