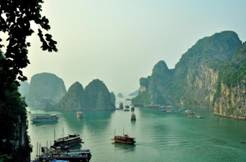 From Ho Chi Minh to My Son, Nha Trang to Ha Long Bay, Vietnam is intoxicating. With energy and charm of equal proportions, and a regal history of passion, war and conquests to rival any European history, Orion II’s nine-night Vietnam Explorer voyages include not one, or two, but four UNESCO World Heritage sites - Hue, Hoi An, My Son and Ha Long Bay. Extraordinary, even by Orion standards!
Whether it is the organised chaos of cruising the Saigon River with its junks, exploring the traditional fishing village of Baie de Cu Mon, rarely seen by outsiders, or exploring Nha Trang with its Communist Party headquarters, beach brewery and $1 lobsters for lunch, a voyage with Orion promises, and delivers, the unexpected.
Even Ha Long Bay is explored with fresh eyes. Seen from onboard a traditional junk, wending peacefully through the islands, the soaring limestone karsts are spectacular; venturing into limestone caves with the expedition team on Orion II’s Zodiacs adds another dimension completely.
In both 2011 and 2012 there are three scheduled nine-night Orion II Vietnam Explorer voyages alternating between Haiphong (for Hanoi) and Ho Chi Minh City and including Nha Trang, Baie de Cu Mon/Bai Nam Beach, Da Nang (for My Son and Hoi An), Chan May (for Hue) and Ha Long Bay & Cat Ba. 2011 departures are 18th November, 27th November and 6th December while 2012 departures are 12th, 21st and 30th March.
Prices start from £4,295 per person including nine nights onboard Orion, all meals, entertainment and educational programmes, use of the ship’s sporting equipment and facilities, Zodiac excursions, port and handling charges, tender transfers and government fees and taxes.
For further information visit http://www.orionexpeditions.com/ or The Cruise Line.
Posted by Steve Newman at 00:01