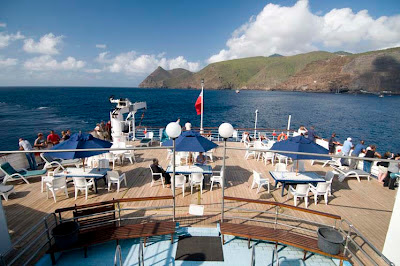 The remote South Atlantic island of St Helena continues to prosper with visitor figures rising by three per cent in 2011, according to latest statistics released by St Helena Tourism. Overall, 2,177 visitors were brought to St Helena’s shores in 2011 by the 128-berth passenger/cargo vessel, the RMS St Helena, currently the only regular means of accessing the island.

The UK remains the second largest source of tourists (behind South Africa, the nearest mainland to the island), accounting for 33 per cent of all tourists to the destination. With construction underway for the island’s very first airport, expected to be operational by December 2015, tourism is forecast to grow.

In addition to passengers brought ashore by the RMS St Helena, cruise ship arrivals are also rising. Seven cruise ships called at St Helena in 2011/12 bringing over 2,800 passengers ashore, compared to 1,600 passengers in 2010/11.

A recent survey conducted by the tourist board, reported positive satisfaction levels among cruise visitors, with over 90% of visitors rating their visit as ‘good’ or ‘excellent’ with people describing St Helena as ‘a place to rival Eden’. An encouraging 92% said they would recommend the island to their friends. Highlights mentioned including Jacob’s Ladder, the Napoleonic sites and Plantation House – residence of the island’s Governor and home to Jonathan the tortoise – reputed to be the oldest living animal in the world.