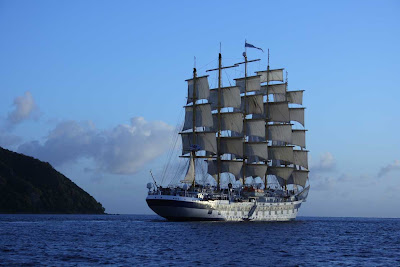 Those tired of arriving in port to find it crammed with giant ships and several thousand cruise passengers swarming all over town should consider cruising on a smaller ship with access to less crowded and more remote destinations.
Tall ship sailing specialist Star Clippers sails itineraries that feature wonderfully off-the-beaten-track ports and anchorages, some so remote they are visited by no other ships, others accessible only to sailing ships like the company’s three graceful full-rigged tall ships.
Small ports in the Mediterranean
Ponza, Italy Visited by wealthy Italian weekenders who have homes there but otherwise unspoiled and rarely touched by the larger cruise lines. There are plenty of authentic bars and restaurants in the pretty town. Featured on Royal Clipper’s Rome-Rome itineraries throughout Summer 2012
Dalyan River, Turkey An anchorage attracting only the smallest ships. Take a flat-bottomed boat ride along the river, which is lined by reed beds, to see spectacular Lycean tombs cut into the rocks above, while keeping an eye out for the turquoise flash of a kingfisher. The excursion here includes a stop at a natural outdoor thermal pool with therapeutic mud baths. Featured on Star Clipper’s Southern Cyclades itineraries throughout Summer 2012
Hvar, Croatia Famous among the yachting fraternity but not visited by many cruise ships, other than very small or very upmarket vessels. Hvar is one of the smartest marinas along the Croatian coast, with a great nightlife scene in summer. Stony beaches mean the water is crystal clear, with some wonderful swimming spots from tiny, pine-fringed beaches. Featured on Royal Clipper’s Venice-Rome itineraries throughout Summer 2012
Limnos, Greece As sleepy as a Greek island as you could hope to get, with decent swimming and snorkeling and a laid-back town overlooked by an amazing ruined castle, with extensive battlements snaking over the mountaintop.Featured on Star Clipper’s Yachtsman’s Paradise itineraries on June 23 and August 18, 2012
Monemvasia, Greece A fortified medieval town clinging to a towering hunk of rock that’s linked to the mainland by a causeway. Cross the causeway and climb the path to the upper town, a maze of narrow, cobbled streets, and the fortress for amazing views.  Featured on Star Clipper’s Northern Cylades itineraries throughout Summer 2012.
Small ports in the Baltic
Halmstad, Sweden A small port along Sweden’s Golden Coast lying amidst a maze of islands and rocks deeply indented by the sea and a favourite haunt of the sailing and fishing-addicted Swedes. Featured on Star Flyer’sWarnemunde to Oslo itinerary, August 12, 2012
Marstand, Sweden: Another popular sailing spot, the coast dotted with tiny, wooded islands and quiet anchorages. Setting for Sweden’s Match Cup Sailing Week, Marstrand is a small island, a ten-minute ferry ride from themainland, and only non-motorized vehicles are allowed. It’s guarded by a 17th century fortress and is home to some surprisingly smart boutique hotels and places to eat. Featured on Star Clipper’s Oslo-Copenhagen itinerary, May 26, 2012
Small ports in the Caribbean and Central America
Ile des Saintes : A beautiful anchorage off the coast of Guadeloupe, only accessible to the smallest ships. There’s a tiny town, with some waterfront shops and bars and surprisingly chic and arty shops, and a crescent-shaped beach half an hour’s walk across the saddle of a hill. Featured on Royal Clipper’s Windward Islands voyages from November 2012 to March 2013.
Saba The smallest island in the Netherlands Antilles group, Saba is the remains of a dormant volcano, jutting abruptly out of the blue Caribbean Sea. This little known speck of land, with only 1,500 residents, is both remote and romantic, favoured by divers and honeymooners.  Featured on Star Clipper’s Leeward Islands voyages throughoutWinter 2013.
Isla Iguana, Panama An exquisite beach on a tiny island populated by frigate birds, lizards and butterflies. Thesnorkeling is superb and there are no facilities at all, which keeps it free from litter and tourists. Take a walk through the rainforest to the more exposed side of the island, where there’s a frigate bird hatchery. Featured on Star Flyer’s Costa Rica to Panama itinerary, March 24, 2013
To book a Star Clippers tall ship cruise, call 0845 200 6145 or visit www.starclippers.co.uk.
Posted by Steve Newman at 00:00