Hurtigruten Go to the end of the World. 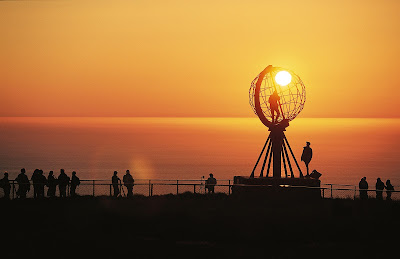 Journey to ‘the end of the world’ this year and visit the magnificent North Cape - Hurtigruten’s best-selling excursion. More than 57,000 guests took a trip to the famous rock plateau in 2011 making it the top-selling excursion once again.
Hurtigruten guests flocked to the northernmost point of Europe on both the ‘North Cape’ (from £82pp) and ‘Breakfast at the North Cape’ (from £108pp) excursions, with the natural attraction being the spectacular plateau that rises a dramatic 307 metres straight up from the Arctic Ocean.
Tromsø, Norway’s biggest city north of the Arctic Circle, also proved to be a major draw for guests, with almost 20,000 of them attending the ‘Midnight Concert in the Arctic Cathedral’ (from 41pp), the second best-selling excursion. In third place was the ‘Arctic Capital Tromsø’ tour (from £45pp), with more than 18,000 participants. The city was recently named as one of the top 10 cruise destinations of 2012 in the Frommer’s Guide.
Hurtigruten guests have a wide and diverse excursion programme to choose from, whatever their itinerary, whenever they sail. A total of 45 different excursions are offered on the 12-day Classic Round Voyage from Bergen to Kirkenes. The maximum number and selection depends on the time of year.
Classic Round Voyage – from £1989pp – Take the 12-day Classic Round Voyage from Bergen to Kirkenes and back. Starting at £1989pp from 15 April to 31 May, the price includes full board on the ship. Flights are extra and can be booked via Hurtigruten from £400pp. Based on two sharing.
For more information call Hurtigruten – 0844 448 7601 www.hurtigruten.co.uk
Posted by Steve Newman at 00:01

Email ThisBlogThis!Share to TwitterShare to FacebookShare to Pinterest
Labels: Hurtigruten