To St Kilda with Noble Caledonia 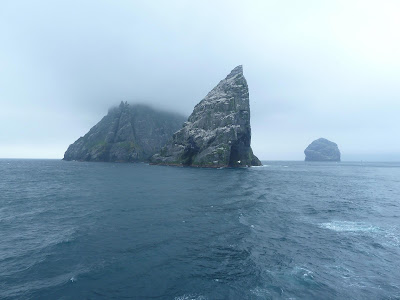 The St Kilda archipelago is one of those places that are close enough to visit for a birding trip but far enough away to put you off the idea. It is also lashed by some of the fiercest Atlantic storms please don’t be put off and do make an effort sometime to go there. Now Noble Caledonia include a visit here as part of their amazing birdwatching cruise along the length of the west coast of Britain.

It’s not the easiest place to get to but it is such an incredible experience and as always depending when you go will get you some great birds. 210 species have been recorded here and you get the most amazing experience even before you get there with the three giant stacks, one of them the island of Boreray, that house the world’s largest gannet colony and you’ll hear and smell the birds from some distance away.

It was a Great Skua that gave us our first drama after having passed through the two stacks when one pounced on a surfacing gannet forcing it to regurgitate the fish it had just swallowed beneath the waves. The gannet just lay on water as if it had been frozen in fright which now on reflection I guess it had.
St Kilda has the largest colony of Fulmars in the British Isles and also the tallest sea stacks and has an estimated population of a million seabirds on its incredible cliffs.  If that isn’t enough at 1400ft, Conachair boasts the highest sea cliffs in Britain but be prepared to be dive bombed by great Skuas if you trying to get to the top of here!
Because of its position St Kilda is used as stop over for species migrating to Iceland and Greenland such as northern wheatears. Each year, in spring and in autumn, the islands are visited by an ever-growing list of migrants and vagrants. Some are on their regular route to and from those northerly breeding grounds, whilst others are blown off course with some 21 American species now being recorded with five or more records for Baird’s sandpiper, Pectoral Sandpiper and American Golden Plover.
You can now visit the world's largest Gannet Colony on the sea stacks of St Kilda (Above)  with Noble Caledonia or other birding islands on their Hebrides, Orkney's and Shetlands birding cruises. For more info' and booking details, be sure to check out this link with the UK's adventure cruise specialists, The Cruise Line Ltd.
Posted by Steve Newman at 06:35