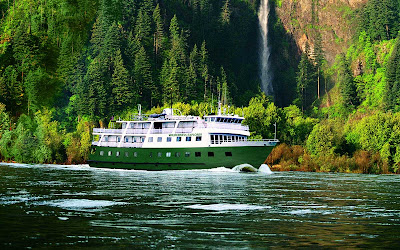 On the heels of a sold out inaugural season in Alaska, InnerSea Discoveries announces the acquisition of the 76-guest Wilderness Explorer, formerly the 86-guest Spirit of Discovery. After significant renovations, the ship will sail active, adventure un-cruises between Juneau and Sitka, Alaska beginning summer 2012.
Beginning June 2, 2012, the Wilderness Explorer will sail weeklong un-cruise adventures between Juneau and Sitka, Alaska with three days spent exploring inside Glacier Bay National Park. A National Park Ranger will stay aboard the ship for the full three days to provide interpretation on the area’s history, culture, geography, flora and fauna. The park ranger, along with shipboard expedition guides, will also lead guests on hiking and kayaking expeditions within Glacier Bay. Other areas to be explored include Icy Strait, Chichagof Island and Peril Strait. In May and August, two-week cruises between Seattle and Juneau (and reverse) will be offered.
The new Northern Passages & Glacier Bay itinerary will sail from Juneau on Saturdays linking it to the line’s two other vessels—60-guest Wilderness Adventurer and 76-guest Wilderness Discoverer—which sail between Juneau and Ketchikan, AK (and reverse) on weeklong adventures beginning and ending on Saturdays. An all-encompassing three-week voyage combines a two-week roundtrip Juneau cruise with a weeklong cruise on the Wilderness Explorer.
For further information visit http://innerseadiscoveries.com/destinations/alaska/alaska-wilderness-passages-discovery Inner Sea were featured yesterday on Time Spent at Sea World of Cruising magazine's blog.
Posted by Steve Newman at 06:40