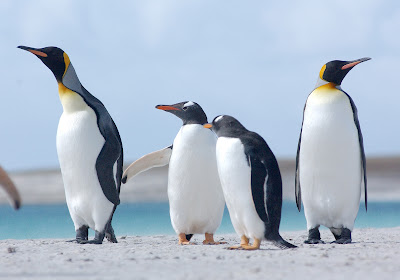 There has never been a better time to splash out and combine a home and abroad ‘penguinoliday’ of a lifetime. Visit London Zoo to see the penguins once they have settled into their new home and then take the ultimate penguin trip to one of the great penguin capitals of the world - the Falkland Islands - to see these much loved creatures in their natural habitats.
The Falkland Islands, situated 400 miles off South America, are home to 770,000 penguins including rockhoppers and macaronis (as found in London Zoo) as well as king, gentoo and Magellanic penguins. Here are some tips for spotting the BIG FIVE of the penguin world in this stunning South Atlantic archipelago:
Kings: Tall, elegant and the biggest of the Falkland Islands penguins. Take a day trip to Volunteer Point – the largest king penguin colony in the Falklands and most accessible in the world – three hours by vehicle north of Stanley, where they reside year round.
Gentoos: The largest gentoo population in the world is found in the Falklands. The gentoo penguins live on the islands throughout the year and can be seen on the mainland and many Outer Islands.
Magellanics: Known to Islanders as jackasses, because of the loud call they make (resembling the braying of a donkey) when standing at the entrance to their underground nests. The Magellanics can be seen on the Falkland Islands during the summer months (September – April).
Rockhoppers: The smallest Falkland penguin and particularly noisy and feisty, making good entertainment for visitors as they literally hop from rock to rock up steep cliff faces. The Falkland Islands hold a significant proportion of the world’s rockhopper population with their distinctive red eyes, yellow brows and vivid plumes. Rockhoppers reside on the Falklands to breed between October and April often in mixed colonies with other seabirds.
Macaronis – fiery golden crested penguins who live in the Falklands in very small numbers, usually mixing with the larger rockhopper penguin rookeries.
For further information on the Falklands Islands, visit www.falklandislands.com.
Posted by Steve Newman at 00:02