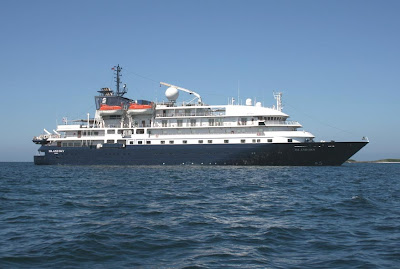 Voyages to the Seychelles and Madagascar Round Out
2014 Small-Ship Cruise Line-Up
Zegrahm Expeditions, the world leader in small-ship cruising and overland adventures, is thrilled to announce the release of Ultimate Aldabra and Voyage to Madagascar. These two journeys—which can be taken in combination—expose travelers to the lesser-visited islands of the western Indian Ocean aboard the all-suite, 100-guest Island Sky.
Departing November 16, 2014, the 17-day Ultimate Aldabra: A Voyage through the Seychelles will explore the remote islands of the Seychelles that have remained largely untouched by humans due to their inaccessibility, and offer the unique opportunity to witness a pristine natural environment. A highlight of the expedition is spending four full days at the magnificent Aldabra Atoll, a UNESCO World Heritage Site. With a perimeter of 70 miles, Aldabra is one of the largest atolls in the world, comprising four major islands surrounded by channels. Additional highlights include: discovering a wealth of rare and endemic species including giant Indian Ocean tortoises; snorkeling over 150 types of coral to discover manta rays, spinner dolphins, and over 850 species of fish; and photographing a variety of sublime vistas. Priced from $12,970 per person, double occupancy.
Then, departing November 28, 2014, the 19-day Voyage to Madagascar with Zanzibar, Comoros, Réunion & Mauritius offers a fascinating combination of natural history and East African culture. Highlights include discovering the unique flora and fauna of Madagascar—photogenic lemurs, 32 species of reptiles, and over 100 species of birds; wandering a labyrinth of serpentine alleyways in Zanzibar’s Stone Town—a UNESCO World Heritage Site—filled with the treasures of the East that established its fame: cloves, cinnamon, and vanilla; snorkeling over some of East Africa’s healthiest reefs, teeming with colorful fish; and exploring the interesting mélange of Arabic and French architecture and stunning natural beauty found in the Comoros. Priced from $13,980 per person, double occupancy.
“We are thrilled to return to this remote part of the world to discover the wealth of wildlife and untouched beauty that is becoming increasingly rare,” states Zegrahm President, Edwin Blythe. “Plus, travelers will be joined by a stellar expedition team on each of these voyages, including four of the company’s cofounders.”
For more information about Zegrahm or to make a reservation on an upcoming expedition, please visit www.zegrahm.com or call 1.800.628.8747.