FROM CIRCUMNAVIGATING ICELAND TO ISLAND HOPPING IN THE AZORES 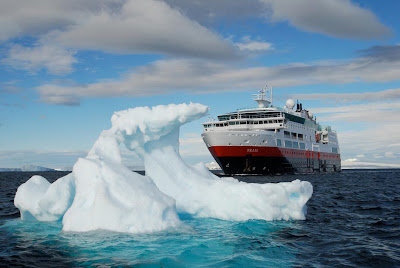 Hurtigruten lines up its new voyages for 2014/15
Fancy visiting the largest glacier in Europe or getting close to thousands of seabirds? Or perhaps travelling from one hemisphere to the other visiting five countries and some of the lesser visited islands in the Atlantic Ocean? Or why not go island hopping in Southern Europe? All this and much more is now possible in 2014 with Hurtigruten, whose latest programme of ‘Explorer’ voyages in Spitsbergen, Greenland, Antarctica and Europe features new itineraries and additional departure dates due to the ever-increasing demand to visit some of the most remote places in the world. A full expedition team is on board to ensure everyone gets the most out of a voyage and learns more about the destination being explored. And early bookers can take advantage of up to 25% savings – its time to get booking that 2014 trip of a lifetime.

New itineraries include:
ICELAND:
THE LAND OF FIRE AND ICE – Circumnavigating Iceland - from £3834pp
For the first time Hurtigruten is offering a voyage that circumnavigates Iceland, taking in its nature and history and learning more about this mystical island with a programme of onboard lectures. For bird lovers there is a trip to the Hornbjarg Cliff which is teeming with birds and where the noise can be overwhelming at first and Vigur with its puffins, guillemots and arctic terns! Vatnajokull is the largest glacier in Europe and a stop is made here too. This 11-day voyage departs Reykjavik on 25 May 2014 and costs from £3834pp including full board, 10 nights on the ship and lecture/landings programme. Based on two sharing. Flights are extra.
EUROPE:
THE BEST OF THE SOUTH WEST – Islands of Southern Europe – from £1643pp
This island-hopping voyage from Las Palmas to Lisbon takes in a carefully selected collection of interesting, warm and sunny destinations in southern Europe. Visit the lesser-visited parts of the Canary Islands such as El Hierro and La Gomera, get to know the green and lush Madeira and the contrasting island of Porto Santo and explore three of the remote islands of the Azores: San Miguel; Pico Isla and Terceira, all in one voyage before finishing in Lisbon. Hurtigruten’s expedition team will give interesting lectures on the history and culture of the places visited. This 12 day voyage departs Las Palmas on 1 April 2014 and costs from £1643pp including full board, 11 nights on the ship and lecture/landings programme. Based on two sharing. Flights are extra.
GREENLAND – additional departures
Due to the speed in which it sold out for 2013, an additional departure date has been added for the ‘National Park Expedition’ which visits the rarely visited North East Greenland National Park, the largest in the world and yet one of the least visited. This 15-day voyage from Iceland to Greenland and then onto Spitsbergen departs on 20 August and 4 September 2014 in the Arctic autumn and before the winter closes in and makes this corner of the planet uninhabitable. Prices are from £5539pp full board, cruise only.
SPITSBERGEN – the return of ‘Polar Bears, Islets and Fjords’ from £2757pp
Hurtigruten’s ‘Polar Bears, Islets and Fjords’ voyage from Longyearbyen in Spitsbergen to Bergen in Norway makes a return in 2014 after several years out of the programme, and this time its on its newest ship MS Fram. En route there is the opportunity to learn more about the fascinating history of explorers and whalers, and experience the wildlife of the high Arctic and along the shores of Norway. During the voyage the ship will visit small and isolated islands, settlements and charming fishing villages, some of which are only accessible by boat. This 13-day trip departs Lonyearbyen on 17 September 2014 and costs from £2757pp including full board, 11 nights on the ship and one night’s b/b in Longyearbyen. Based on two sharing. Flights are extra.
TRANSATLANTIC – ‘Treasures of the Atlantic Ocean’ – from £1635pp
Each year MS Fram relocates hemispheres and unlike previous years when MS Fram simply sailed from Las Palmas to Buenos Aires or vice versa, for 2014 she will make several stops along the way. The ‘Treasures of the Atlantic Ocean’ voyage visits five countries and some of the lesser-known islands of the Atlantic Ocean including the fairytale like island Fernando de Noronha, the St Peter and St Paul archipelago and Sao Vicente and Sao Antao in the North West Cape Verde Islands. Skilled expedition team members will give lectures on various topics arrange landings in some of the exotic ports of call. The crew are true explorers, always seeking new adventures and more knowledge. They will share their skills through lectures and activities so that guests can learn more about life on board, and what goes on behind the scenes. Two voyages are available: 14 March Buenos Aires to Las Palmas and vice versa on 14 October 2014. Prices are from £1635pp including 18 night’s full board on the ship. Based on two sharing. Flight are extra.
ANTARCTICA – voyages extended
Several voyages have been extended to ensure maximum time in Antarctica to explore this fascinating continent. The ‘Land of the Penguins’ itinerary has been extended by 3 days to give more time in Antarctica and the ‘Polar Circle Expedition’ has been extended by two days also.
For more information call Hurtigruten – 0844 448 7601 www.hurtigruten.co.uk
Posted by Steve Newman at 00:00