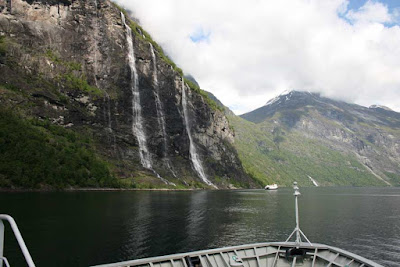 New preview brochure includes more flight options and new itineraries for 2015
Hurtigruten’s new preview brochure for 2015/2016 showcases key Norwegian and Explorer voyages and includes more direct flight charters as well as a new coastal itinerary and ex-UK ‘Fjord Highlights’ Explorer Voyage.
Discounts of up to 25% are available on selected Coastal Voyage bookings made by 30 September 2014 and Explorer Voyages made by 30 June 2014.
Coastal Voyages
Voyage only prices start from £819 per person for the six day Classic Voyage South for departures from January to March 2015 on full board basis.
A number of new regional flying options have been added to the programme with direct charters to Norway now offered from five new regional airports  - East Midlands, Cardiff, Newcastle, Dublin and Jersey. Additional charters have also been included from existing regional departure airports, with 69 planned in total for 2015.
Inclusive packages with direct flights start from £999 per person for a five day Arctic Highlights trip including direct flights from Gatwick on 16 March 2015 and voyage on half board basis departing from Tromso and sailing north to Kirkenes, then back to Tromso.
Classic Round Voyages from Bergen to Bergen start from £1,415 per person including the 12 day voyage and return flights.
The new eight-day ‘Arctic Explorer’ itinerary is ideal for those who want to spend as much time as possible within the Arctic Circle. The trip includes direct flights to Bodo from Gatwick or Manchester, northbound coastal voyage from Bodo up to Kirkenes and then southbound back to Svolvær, where guests will spend two nights before transferring back to Bodo for the flight home.
The ‘Arctic Explorer’ costs from £1,579 per person for the eight day trip on full board basis including voyage and two nights accommodation in a hotel, as well as a full day Lofoten sightseeing tour and entrance into the Bodo Air Force Museum.
Explorer Voyages
A one-off ‘Fjords Highlights’ has been added to the programme, departing from Dover on 1 May 2015. The 10 day trip on MS Fram sails over to Norway visiting some of the most beautiful fjords including Lysefjord, Hardangerfjord and Sognefjord before returning to Dover. Prices start from £1,949 per person on full board basis.
Kathryn Beadle, Managing Director commented “We are very excited about the new additions to the 2015 programme. There is already a strong demand for our direct flights from across the UK, so we are delighted to have an even larger network of regional flying in the pipeline.
“We are also very much looking forward to welcoming the MS Fram back to UK shores. The ship already has many fans in the UK, so we believe the new voyage will prove very popular”.
Prices are based on two sharing.