Hurtigruten Makes it Easier to See the Northern Lights 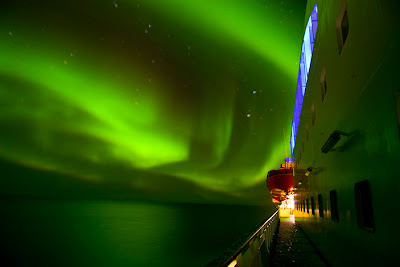 New charter flights from Bristol, Gatwick, Manchester and Edinburgh
Appearing on many a wish list is a trip to see the Northern Lights and with a series of new charter flights launched for this winter, Hurtigruten has just made it easier to do so. A new direct flight from Bristol is featured for the first time and additional dates have been made available for Gatwick, Manchester and Edinburgh on a number of departures between October and December – the first time ever that Hurtigruten has committed to them during this period.
The new charter flights are offered on select departures for the 12-day Classic Round Voyage from Bergen to Kirkenes and back (prices from £1,299pp) and the five-day Arctic Highlights itinerary, which is spent entirely above the Arctic Circle sailing from Tromsø to Kirkenes and back, maximising the opportunity to see the Northern Lights where experts say they are more regularly spotted (prices from £949pp). In addition, a pre-Christmas departure is being offered for the ever-popular Astronomy Voyage (prices from £1,899pp) and following requests this has been extended to a full round-trip.

Whatever the choice of itinerary, there is no better way of experiencing the Northern Lights than from on board a Hurtigruten ship as the aurora are set against a dark night sky, free from artificial light.
Classic Round Voyage – From £1,299pp – Direct flights to Bergen from Manchester (8 November), Bristol (19 November), Gatwick (30 November) and Edinburgh (11 December) for the 12-day Classic Round Voyage from Bergen to Kirkenes and back. Priced from £1,299pp to include flights. Based on two sharing.
Arctic Highlights – From £949pp – Direct flights to Tromsø from Gatwick and Manchester on 29 November, 6 December and 10 December for the five-day Arctic Highlights voyage from Tromsø to Kirkenes and back. An extended six-day stay is also available. Prices are from £949pp, based on two sharing, and include flights.

Astronomy Voyage – From £1,899pp – Departs London Gatwick on 28 October to Bergen. Join MS Finnmarken as it follows the 12-day Classic Round Voyage itinerary from Bergen to Kirkenes and back. Guests will be accompanied by Ian Ridpath, editor of the Oxford Dictionary of Astronomy, who will bring the world of stars, planets and meteors ever closer through a guided tour of the night sky from the deck of the ship and a series of onboard lectures. Prices start from £1,899pp including flights and are based on two sharing.