Silversea land in the Footsteps of Shackleton 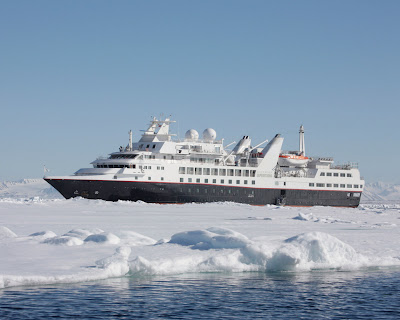 The Silver Explorer and Expedition Team accomplished a first in the ship’s history, landing guests at Point Wild, Elephant Island – the location where survivors of the Shackleton Expedition lived under two lifeboats for more than four months while hoping for rescue.

After attempting to take guests to Elephant Island for nearly 10 years, Silver Explorer’s Captain Alexander Golubev was able to tuck the Silver Explorer into a small and slightly sheltered bay just to the West of Point Wild, due to good weather conditions.
Guests observed the 100m x 30m strip of land, at low tide, where Shackleton’s determined shipmates made a home during the winter of 1916. The zodiacs also passed through a small channel into West Bay which provided great views of Cape Wild and the Furness Glacier cascading into the ocean, plus meet Chinstrap Penguins and see several male Fur Seals and one Weddell Seal relaxing on an exposed beach platform.
Silver Explorer’s unstructured itinerary to ‘Cruise and Explore the Antarctic Peninsula,’ allows the Captain and the Silversea team to determine the exact itinerary as the voyage progresses, as conditions can vary so much in the Polar Regions. Both guests and crew can take full advantage of the available conditions to explore as many sights and make as many zodiac excursions and landings as possible.
You can combine true expedition cruising with an elegant onboard lifestyle with Silversea Expeditions. Offering two 10-day trips from £6,339* per person, on an all-inclusive basis, voyage 7226 departs 3 December 2012 and voyage 7227 departs 13 December 2012 from Ushuaia (Argentina).
Silver Explorer departs Ushuaia (Argentina), cruises through the Drake Passage and then cruise/explores the Antarctic Peninsula, before returning to Ushuaia (Argentina). Price is per person, based on two people sharing a View Suite and includes all shore excursions, port charges, government fees and taxes. Economy air available from £2,299 per person.
* Fares for voyages embarking/disembarking Ushuaia include economy class charter air service between Buenos Aires and Ushuaia, plus transfers between Ushuaia airport and pier, on day of embarkation and disembarkation.
To book or for more information, visit www.silversea.com/expeditions
Posted by Steve Newman at 00:01