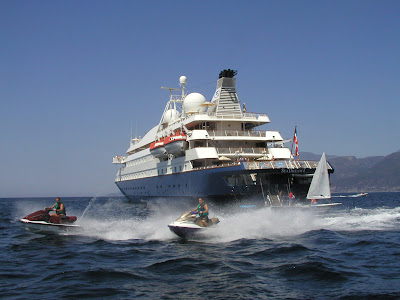 In the first annual Cruise Critic Cruisers' Choice Awards, SeaDream I has been placed as No 1 for Service in the Small Ship category. “Cruise Critic members who have reviewed the ship are clearly very happy with their cruise experience,” said Carolyn Spencer Brown, Editor in Chief of Cruise Critic. “SeaDream I gets excellent ratings for service, which is attentive and formal, without being fussy or intrusive.”


Cruise Critic-issued awards are based entirely on reviews/ratings submitted by cruisers when they posted a cruise review. Cruise Critic, the online guide to cruises, is one of the most influential travel sites on the web. With a world-renowned editorial staff, it provides objective cruise reviews, features, ports-of-call profiles and destination information.
Acknowledging the award, Bob Lepisto, President of SeaDream, said “The crew aboard SeaDream I & SeaDream II are to be thanked for their tireless efforts to ensure each guest is well taken care of. Independent reviews like this reaffirm our claim of providing unbeatable service.”

Just last month SeaDream I was showcased in London, at Tower Bridge, to over 400 UK travel industry professionals and the media, with a series of exclusive invitational events. Following her first time ever visit to London, SeaDream I sailed to Hamburg for a 20-day drydock and now, for the first time, is positioned for her northern-summer season in the Baltic, Northern Europe and the Mediterranean.
Together with sister vessel SeaDream II, SeaDream I is rated the ‘World’s Best Small Ship Cruise Line’ (source: the Berlitz Guide to Cruising & Cruise Ships 2003-2011). The expression “yachting” is not only a statement about size; it describes a lifestyle aboard the intimate vessels. Chic and stylish, SeaDream’s 56-stateroom twin yachts are favoured for their elegant informality, personal service provided by a crew of 95, state-of-the-art facilities, inclusive open bar and gratuities, ocean-view accommodations, luxury spa and world class cuisine. Itineraries include the Caribbean, the Mediterranean and the Amazon. “It’s yachting, not cruising” Enjoy the difference.
For more information vist www.seadream.com or The Cruise Line
Posted by Steve Newman at 13:43