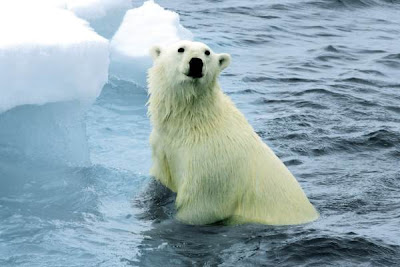 Captivated by the BBC’s Frozen Planet documentary that everyone is talking about? Fancy a trip to the frozen north next summer to see more of the landscape and wildlife of Spitsbergen? Polar experts Hurtigruten have just announced that they will be sending an extra ship to Spitsbergen next summer to meet the substantial increase in interest it is experiencing in the region which has been given a high profile recently following Prince Harry’s Arctic expedition and current Frozen Planet TV programme.
Between June and August 2012, Hurtigruten will send MS Nordstjernen up to Spitsbergen to travel the west coast of the island for a total of 21 five and six day itineraries. This nostalgic ship is well known in the Svalbard Archipelago having sailed there between 1994 and 2009 and for many, exploring this frozen landscape and reaching the 80th parallel on a traditional ship is a perfect combination. Between 2009 and spring 2012 Nordstjernen has sailed along the Norwegain coast. Hurtigruten’s newest ship MS Fram will continue to sail the summer in Spitsbergen also.
Spitsbergen lies just 1200km from the North Pole and is home to the King of the Arctic – the Polar Bear. On the journey through the light polar night in the north of the archipelago guests visit interesting settlements including the Russian coal mining town of Barentsburg and the Ny Ålesund research station, as well as excursions to fascinating glaciers and landscapes. In favourable weather conditions, the ship reaches the 80th parallel. An encounter with polar bears is one of the highlights of the trip alongside walruses, arctic sea birds and of course the Midnight Sun.
POLAR ENCOUNTERS VOYAGE – From £1614pp - A five-night ‘Polar Encounters’ voyage to Spitsbergen on selected dates in June, July and August costs from £1614 per person including four night’s full board on the ship, one night’s b/b in a Longyearbyen hotel plus landings, sightseeing in Longyearbyen and accompanied by an expedition team. Based on two sharing. Flights are extra and can be booked via Hurtigruten from £844pp.
For more infor mation click this link to go to adventure cruise specialists The Cruise Line.  Picture by Nina Bailey   Subscribe to World of Cruising magazine.    Picture by  Nina Bailey
Posted by Steve Newman at 00:05